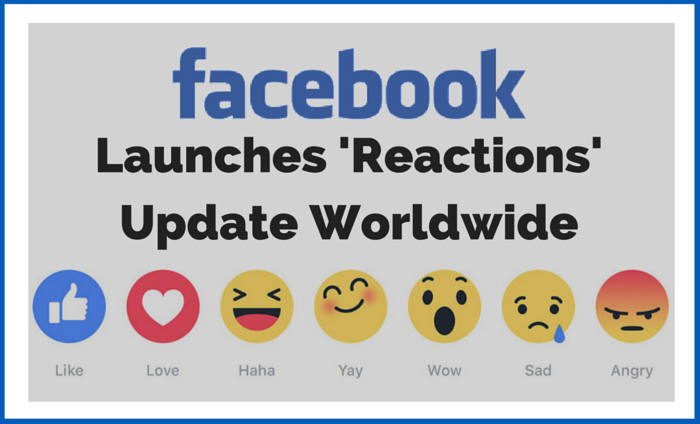 We can finally dislike Facebook posts … kind of. Facebook has officially launched a new ‘reactions’ feature worldwide. The new addition allows users to do much more than simply ‘like’ a post, now introducing sadness, shock, anger, love, and laughter paired with the appropriate emojis.

The new feature is available on both mobile and desktop devices all over the world. On a desktop computer, hovering over the classic like button reveals the five new reactions to choose from. On a mobile device the same occurs when you simply hold down the like button. Users can react to any type of post, whether it is from friends, pages or advertisers.

For the past couple of years there has been wide speculation that Facebook would be introducing a thumbs down button (in addition to the thumbs up button). The dislike button was Facebooks most common request, with users wanting to have the option to negatively react to posts. There was reluctance on Facebooks part to go ahead with such a feature, in fear of it promoting unwanted negativity. The new update does allow users to express negative emotions, however in a more empathetic way.

According to Arstechnica, the reactions update has been in the works for the past year. Facebook spent time conducting tests to carefully consider and determine the best emotions to include in the update.  The changes were available for trial in Ireland and Spain prior to the recent official release. These countries were apparently chosen based on both language diversity and the wide spread use of the network in the regions. The ongoing request for a dislike option suggests users were looking for more options when it came to responding to posts, to put it simply, ‘liking’ something is just not enough. The 5 carefully considered emotions offers users the ability to express themselves more specifically, while without causing insult or controversy. User feedback suggests that the “negative” emotions such as sadness and anger are particularly refreshing, as they allow for more appropriate responses to sad, shocking or frustrating content.

It will definitely be interesting to see how Facebook users respond to the new reactions feature and how well it is utilised among posts. We see these changes as a great way for businesses and advertisers to gain a more in-depth insight into what their audiences think of their posts, and specifically how they are emotionally connecting and responding. Hopefully reactions data will soon make its way into analytics boards for page publishers.