As we see off another year, we can start to take stock of some of the most significant changes that have occurred in our digital marketing space and what they might mean going forward. It’s safe to say, that like most years, the world of SEO in 2018 has moved quickly. We’ve seen a number of large changes take place, including impactful Google algorithm updates, a focus on mobile first indexing and a full redevelopment of the search console platform. Among other things, Google’s local services such as Google My Business and Google Maps were also the route of many notable changes. We’ve seen old trends be replaced by new ones, and advances in technology change the way we approach search marketing. To round things up, we’ve put together a yearly recap for all things SEO in 2018:

Over the course of 2018, there have been numerous notable Google algorithm updates take place. These updates, which primarily impact search ranking, have ranged from big and small, confirmed and unconfirmed. None the less, Google has undoubtedly shaken up search rankings a number of times throughout this past year. The most significant include:

March Core Update: In early March many websites reported notable search ranking shuffles. It was later confirmed by Google that a standard broad core algorithm update was released.  As with most core updates, Google stated that there was no specific ‘fix’ for ranking hits.

April Core Update: As we reported earlier this year, a confirmed core algorithm update was rolled out in April 2018. The purpose of this update is believed to work towards improving the accuracy of search query results by identifying content which best aligns with user searches. 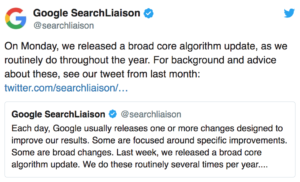 June Speed Update: In June, the pre-announced speed update was released. According to Google, this speed update “only affected a small percentage of queries”, impacting the rankings of only the slowest websites. We mentioned the speed update in relation to mobile optimisation in greater detail: here.

August Medic Update: Around August 1st of 2018 we saw the most significant algorithm update felt by the SEO community. This update is referred to as the ‘Medic Update’ and was confirmed by Google.  The medic update is classified as a standard broad core algorithm update, however, seemed to have a deeper impact on ranking particularly for websites within the health and YMYL categories. There is a hunch that this update was focusing on the intent behind user searches, although this has not been confirmed.

2018 was the year of mobile-first indexing. In short, Google began crawling and indexing the web from the view of a smartphone, as opposed to a desktop computer. Since these large indexing changes were rolled out earlier in the year, it is confirmed that over 50 percent of search results are now indexed via mobile-first indexing.

We covered the rollout of mobile first indexing and what it means for SEO in great detail: here. Google has also released detailed information guides for developers and marketers to prepare for the continued focus on indexing mobile first: here.

The widespread adoption of voice assistant technology and devices such as Google Home and Amazon Echo has been of significant interest to the SEO community in 2018. The popularity of voice assistants and voice searching has truly adapted the way that we are approaching search optimisation. 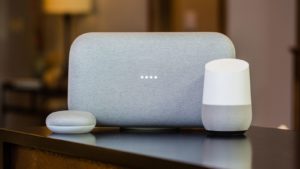 A big part of the changes which come with voice assistants include the decreasing need to click on a website to get the information that you’re looking for, this is directly related to the ever expanding SERP widgets such as knowledge bars and featured snippets. Content today is more and more about keeping naturally formatted questions and answers in mind when writing content. When someone asks “Okay Google, what is X.” they aren’t being presented with the trusty 10 blue links, rather a precise snippet of information that is, hopefully relevant.

The Google Search Console has seen many changes throughout this year. The beta label from the new platform was removed, and everyone was provided access to use it. Towards the end of the year, reports from the old console began to be redirected to the new version, making it primary and preferred.

The new search console comes with a number of new features, including the introduction of slow site notices, the new URL inspection tool and new reports for data such as event listings, mobile usability, and links.

On top of the new platform release, Google also stopped supporting public URL submissions to its search index and changed the quotas for URL crawling submission.

In the local SEO space this year, Google Posts saw a lot of fine-tuning. Google tested a number of interface variations, introduced new post types and expanded posting options in general. Initially, utilising Google Posts seemed to be a valuable effort, bringing in additional traffic and engagement from local audience. However, toward the end of the year, these levels have begun to decline.

Google My Business remained prominent as the control panel for local SEO, allowing businesses to readily manage their local presence on Google SERPs and Google Maps. Throughout 2018 Google continued to test and introduce new features to complement the Google My Business platform, including an updated mobile app which allows business to manage their listing on the go. As well as this, an agency dashboard was even created for local SEO agencies to manage multiple listings from one portal.

At the start of the year, we published an informative article which outlines a number of helpful tips for marketing a business in the local search space. Read to learn how your business can benefit from local SEO efforts.

Something we can always count on happening in the SEO world is constant change. Throughout 2018, Google has made a number of user interface tests and changes. These changes include the rolling out of a new desktop search results design, the hiding of results for time, calculation and conversion related queries on mobile, and the home page showing a discover feed as well as the search box.

Another example is, as we reported, Google increased the length of snippets, and then later rather discreetly decreased them back. The autocomplete prediction function continued to improve and expand, as well as the introduction of some limitations, including the exclusion of violent or sexually explicit predictions. These are just a few examples of countless testing and changes that have been recorded and reported over the course of the year.

SEO changes, a lot. In the digital marketing space, there is no room to set and forget your efforts. Constant research, management, updates, and effort are required to maintain the effectiveness of your SEO strategies. As Google changes it’s software and UI, as technology advances and trends come and go, we must be ready to adapt to these changes. As evident in our yearly recap of 2018, a lot has happened to impact SEO this year, and it’s safe to say that changes aren’t going to halt any time soon.

The ever-changing digital marketing world can be overwhelming for anyone, please don’t hesitate to get in touch with the Lauren Benedetti team if you need help marketing your business online!